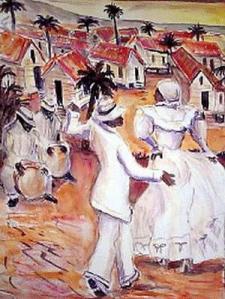 I never saw my mother and father kiss. I never saw them hold hands. In the neighbor¬hood they were known as Dona Cruz and Don Juan. In my Puerto Rican neighborhood in the Bronx, my father was popular for the Saturday night domino games. My parents owned an apartment building and it was on the front stoop where everyone gathered and as the men played, the women chatted while music played in the background.

At the time, my brother was dating someone he considered special. None of us expected much out of it considering my brother’s marriage record. My brother’s girlfriend was family¬ oriented and thought it was a great idea to have the whole family come together for dinner. Family to me meant the immediate family, father, mother, brother, and sisters. Yet, in my ancestry, a family is much more. The adage “blood is thicker than water” was often repeated by my brother, Tony. Family was and is everything, no matter how much you may want to resist its influence. No matter what a family member does, he or she will always be protected or helped by the entire group. My father was the man of the house, the provider of the family; he was always to be respected. The woman only appeared to be in her husband’s penumbra, but actually, she lead of the family.

The youngest siblings were my sister and I, and we were not interested in attending this family union, but of course we all went anyway. Every so often, during a conversation one person or another subconsciously moved their upper torso or tapped their foot to the conga rhythm that played in the background. The adults would name the title of a song or the singer and reminisce about the first time they heard it. They spoke with enthusiasm and admiration of various singers such as La Lupe, Celia Cruz, and musicians like Tito Puente and Willie Colon.

Ever since I was little my father always had the Spanish radio on in the morning. I heard dramatic life situations in novellas. I also heard Latin music. I loved to dance. There was one occasion I vividly remember. I was about four or five years old and I tucked the back of my small dress into the back of my panties and stuck a feather duster in the middle of the little bushel I created so I would look like a showgirl. Then I danced and danced to the percussion I heard on the radio and to my father’s delight. As I grew older my attention was toward The Beatles and rock -and-roll. The names Willie Colon and Tito Puente would remain echoes from the radio until I was older and learned to appreciate the music that I thought was not in my blood. There was one song that thrilled everyone and upon Lupe’s request everyone got up to dance.

At first, my father politely refused and giggled like a young school boy. My mother covered her mouth with both hands shaking her head no as her chest trembled with laughter.

Then they both stood up and looked at each other as though they had just met. It was the first time I saw my parents with their arms around each other. Did they know how to dance? Were my parents ever in love? The music enveloped the room like a warm glove and my two sisters, brother, nieces; nephews and I were excited as we watched my parents dance.

There is something magical about mambo music that reaches the inner core of our souls. The Puerto Rican’s history of music is a mosaic of various influences, musical and non¬musical. The music translates the challenge and effort that as a culture we had to face. We recreated our identity in the mainland since we were so far away from our island. With music we come together to celebrate any occasion because it translates for us, our inner voice and struggles. Latin music is another language used to communicate with each other. No words have to be spoken; the light touch of the man’s hand on a woman’s body dictates the direction of movement. One can be blind and still communicate solely on the touch of the male toward the female. And it is that touch that I saw exchanged between my parents.

I didn’t know how to dance Latin even though I watched my brother dance with various women at parties. My favorite was to watch the women who wore full skirts and can-cannes because inevitably at the heat of the dance, a woman would take a part of her dress in one hand and hold it to the side while she swayed her hips to the music.

That evening I asked my brother to teach me how to dance el Mambo.

All rights reserved. No part of the short stories may be reproduced, distributed, or transmitted in any form or by any means, including photocopying, recording, or other electronic or mechanical methods, without the prior written permission of the author, except in the case of brief quotations embodied in critical reviews and certain other noncommercial uses permitted by copyright law. For permission requests, write to the author, “Attention: Permissions Coordinator,” and email to storeetalks@outlook.com