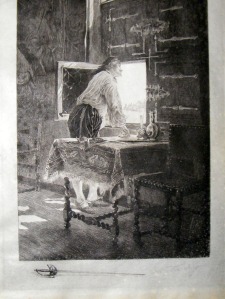 “What are you thinking of?”

It is a question Marie knew better than to ask when she sees Hector staring out of the window and into the playground below their third story window.  The children’s swings and wooden maze structure remain empty on this bitterly cold day of snow with the intermittent fall of hale.  Hector ponders the missing laughter that echoes into their apartment when the days are warm.  The radio plays behind his thoughts as Marie irons her uniform.

It was an agreement they both shared before they married and at the time, Hector’s desires were fulfilled with the thought of their future together.  How can he explain to Marie of his visit to the botanica that she dislikes and realizing that the marriage is not enough.  How does he explain the dark skinned woman with the red scarf tied behind her hair reading Hector’s special cards.

“Here is the man with three staves, and here the Wheel, and here is the one eyed merchant, and this card, which is black, is something he carries on his back, which I am forbidden to see.”

In Hector’s heart, what is forbidden is what he desires most.  Now, his life is haunted by an empty playground that he wishes he could fill with the laughter from his own flesh and blood.

Without the thought of the repercussion of his words, “What did you get married for if you don’t want children?”

Marie looks at Hector with a pained expression knowing that one day the subject of children would surface.  Until this moment, Marie always trusted it would be only him and her.  She starts folding up the ironing board and wraps the cord around the iron, pretending she didn’t hear the question.

The word of a child never escaped from Hector’s lips during their four-year marriage, but it’s the veil over his eyes when he looks at the playground that unnerves her because he becomes so detached, she almost feels abandoned.

When Marie was little, her favorite game was playing grown-up.  Marie would kiss her cousin’s cheek because he made such a cute husband, then drop the baby off at the babysitters before driving in her make-believe car to work.  The chance to make the game real ended when she went to see the doctor two days after her 24th birthday.  Now she stands behind Hector with one hand on his shoulder and her other hand holding a cup of coffee.  She looks around the apartment, “What shall I do now?”

Marie puts the cup down, softly combs Hector’s hair with her fingers, and almost whispers, “When I count there are only you and I together.”  She stops and begins to turn away when Hector pulls her hand back with his placing it to his chest, and looks up at her.

(Lines from the poem “Wasteland” by T.S. Eliot, is used throughout the story.)

Here is the man with three staves, and here the Wheel,

And here is the one-eyed merchant, and this card,

Which is blank, is something he carries on his back,

Which I am forbidden to see.

‘Speak to me. Why do you never speak? Speak.

‘What are you thinking of? What thinking? What?

‘I never know what you are thinking. Think.’

All rights reserved. No part of the short stories may be reproduced, distributed, or transmitted in any form or by any means, including photocopying, recording, or other electronic or mechanical methods, without the prior written permission of the author, except in the case of brief quotations embodied in critical reviews and certain other noncommercial uses permitted by copyright law. For permission requests, write to the author, “Attention: Permissions Coordinator,” and email to storeetalks@outlook.com